Life appears to us as an exquisite framework suspended in the Universe, which transits...

And due to their different knowledge, events occur that in the case of the human species, were attributed to the lack of correspondence between the human and the Creator -and the Divine.

And so, droughts, floods, disorders of any more particular or general nature, wars, pandemics, were attributable to divine punishments, for not having complied with the law: the law of religions, philosophies or spiritual approaches of various kinds.

As we go along, we discover -as humanity- different aspects that justify the pain, the drama, the suffering... due to different causes.

And a consciousness of 'knowledge' gradually opens up... in which only "erudition" counts as an explanatory resource for the different events.

Thus, gradually, human being becomes the centre; the cause and the effect; in the origin and development. There is no need for mysterious and divine rewards or punishments.

A universal event, life, thus becomes an encapsulated event that feeds on itself, self-destructs, self-justifies...

So, although "before" it was -in some way- universalised, giving deities to rain, lightning, droughts, abundance, lack..., today life of humanity is withdrawn, explaining everything that happens.

But... not including any unknown, mysterious, unforeseen, unexpected event...

These are general features that should be kept in mind on a daily basis.

The Praying Call warns us about "the cloister"; about the closing of the universal consciousness...; about the unknown why of life; about the permanent mystery of not knowing... And thus, leaving aside –due to these evidences-... to leave aside the centripetal, the exclusive, the unique reference that gives explanation to everything from the human point of view.

It may be a very simplistic thought, yes, but more and more the being isolates itself and withdraws and concentrates...; it self blames, self-rewards...; rewards and blames... And that gives it enough prominence to become as the beginning and end of life.

The ego maturity, of the self, reaches an absolutist sense... and becomes disconnected from the living systems of its own species and its indispensable resources.

Thus, human being is proclaimed as the powerful being of life and death...; of war, peace...; of conflict, calm....

It could be said, from the Mystery, Creator Mystery:

"I will let you reach the depths of the abysses. And when you don't know how to stop the fall and the blow, you will know and discover who picks you up".

Each being is a representation, an equivalent of humanity.

And each one has its correspondence with creation.

And this is how we can discover individual and group positions... on living, being, thinking, feeling...

Reason, with its logic of cause and effect, is more or less usual and familiar, although it does not function, in consciousness, in the same way in every being. It will depend on many factors. Although there will be global responses, there will still be different, individual responses.

It is more or less known terrain... in the modules of knowledge established by human centralism.

But it doesn't stop there. Every time a nucleus of reason is activated -"one"-, an immensity of sensations, feelings, emotions, imaginations, fantasies, illusions... is generated.

This world of feelings is a world without anchorage, without security, without calculation, without domination. And what's more, when we try to dominate, calculate, educate, correct... the being is altered, depressed, anguished, desperate.

And since all this happening is... unpredictable, the Mystery becomes present in these senses, feelings, emotions, illusions, etcetera.

The Prayerful Call prompts us to perceive, to become aware of the senses and emotions that are gestating. Some of them will be the decoration of a good reason, yes, but most of them will be unknown. Unknown in its origin.

The connections to Providence will be there, in those infinite areas

There will be the possibility of detaching ourselves from being the centre... to become an element -one more- that moves -that is moved-; that does -that is made to do-; that arrives -because it is allowed to arrive-.

The very 'knowingness' of the being leads us to search the depths of matter... and makes us poeticise in an immense uncertainty.

As it could not be less in this development of human life, when this situation arises, the being opts for duality. And it has a part, an action in which... it reasons, explains, calculates, does... and another area in which it feels, gets excited, cries, laughs, imagines, fantasises...

It separates. And note the word: [1]"se-para"(stops). With this double meaning: on the one hand, to separate something that is inseparable; and on the other hand, to stop: it stops in its evolution.

And this evidently makes it repeat and repeat events... of delay; events already known, with already stipulated answers. It stops.

And living as a being of the Universe... it doesn't stop! We are moved! Yes! We are!

Nevertheless, the endearing Creator Mystery allows us... -so to speak- "allows us" -to later feel its necessity-... allows us to stop, to separate; which brings isolation and, consequently, lack of solidarity, loss of empathy, lack of communication, lack of interpretation...

And to save that duality -but to exercise it- it establishes the compartments, the sections, codifies the behaviours... and stops again. Because, even if it feels satisfied with what it has achieved, it will not last long. Because it lacks the breath. It lacks the Creative sigh. It lacks the consciousness of a happening of the Universe.

We are in that transit... of duality, of speciality, of calculation, of centralism, of absolutism... And it is the Praying Call that calls us to discover that... we have been allowed to get there, but that is a reason to discover ourselves in our smallness, to alert us to our selfishness, self-centredness, egomania.

From our focussed, condensed consciousness, one might say: Why have we been allowed to come this far? Why hasn’t it been avoided, if we are an essence of the Creator Mystery?

Seen in this way, we move away from centralism and we can say to ourselves, in private:

Do I have to call Creation to account? Do I have to complain whether it has done well or badly? If it has been just or unjust? Do I really have the solvency to ask these questions, or have I created it... and they have left me to it? I have gestated an explanation on the basis of bits and pieces of reasons..., to declare myself and my autonomy, my independence.

This is how humanity flees from the created, flees from... the Mystery. Because it tries to approach it, to grasp it, to dominate it. And in the face of impotence and inability it flees, to take refuge in its hedonism.

And instead of being a species of exaltation, gratitude, amazement and admiration, it becomes a coward species! Coward, conformist, confused... and rallied around its vulgar and reasonable opinion.

We are a creative image of the Creator Mystery. And gather ourselves in that consciousness in our daily actions, in any circumstance, makes us aware in a different way from what is imposed on us, forced on us; from what we impose on ourselves and force on ourselves personally.

Human is a magnificent, unique, exceptional, subtle... and elegant work.

We are call to those dimensions. Certainly, the ones that relieve us from pressures, from prisons, from possessions

The prayer we practice does not belong to any religion. We believe prayer can be a liberating and healing instrument. It is referenced in Creation and, without naming them, in the different Forces that animate us. Our belief that prayer is an essential element, led us to create a space dedicated exclusively to prayer: “The House of the Sound of Light” located in a farmhouse in the Basque Country, in the province of Vizcaya. There, prayer encounters and retreats are held. 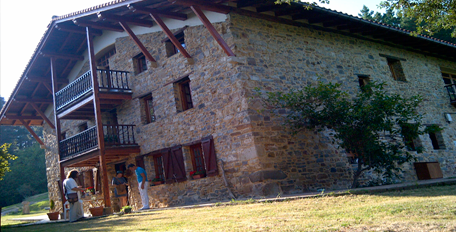 Neijing Schools in the world